Back To All Reviews

Fiona Spargo-Mabbs, a very dear friend of PF’s, tells the story of her son, Dan, and the tragic and life-changing events which occurred when he decided to attend a rave, take MDMA and was then found unconscious. Tragically, he never regained consciousness and died from organ failure caused by the drug three days later. Dan was just sixteen years old. 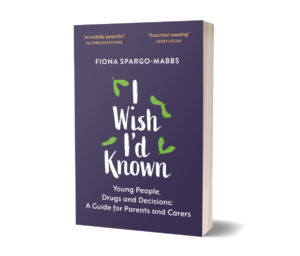 The book is a mix of the reaction and trauma which Fiona and her family went through and, what she considers, the vital role that parents and carers must take in supporting children to make safe and informed decisions about drugs and alcohol. Every chapter is based around a different aspect of what she wishes she had known.

With brutal honesty, Fiona describes Dan’s last days in the hospital as the medical team worked tirelessly to save him. Her family inevitably came under media attention and, like so many others in the same tragic situation, were blamed for not knowing what Dan was doing, for poor parenting, and for not warning him about the dangers of drugs. They became familiar with the part of Dan’s life he chose to keep from them. He had already taken MDMA twice with apparently few lasting effects, before his last fatal dose.

Dan had a very open relationship with his parents. He was popular and wellliked, with a large circle of friends at school. Fiona was working as a specialist in Family Learning. Sadly, she realised that none of this had really helped her understand how to have a meaningful conversation about drugs with her children.

When Dan died, she said ‘there was so much I didn’t know.’ She decided to start learning about all the drug issues in our society. Along with her husband and surviving son, they set up a charity in Dan’s name. The charity works to ensure that these conversations, and an understanding of the drug culture with all its pressures, can be discussed.

Most young people obtain drugs from their friends. Exposure to social media also plays a part. It can normalise drug taking, make them more accessible and create the misbelief that what they see are manufactured, tested and controlled substances.

Our young people are open to so many influences and streams of information, and the drug business is large, well-organised and a ruthless exploiter of media. Throughout the book, Fiona suggests many different ways of starting the conversations about drugs— these ‘talking and practical points’ are little gems and cover a wide variety of situations and topics.

This book is essential reading to equip you in creating a non-judgemental, supportive and knowledgeable approach to drugs.

Mike Crussell is a PF Area Leader and Group Leader of PF Milton Keynes. Fiona and Tim Spargo-Mabbs volunteer for PF on the Sycamore Tree course where they share their story as victims of crime.

Purchase your copy of I Wish I’d Known online at www.dsmfoundation.org.uk