Back To All Prisoner Stories

The idea for an informal network of ‘stone-catchers’ came out of my own experience of being outcast and marginalised by my own friends and family, and through the inspiration of an unknown American lady described as a stone-catcher in the book Just Mercy by Bryan Stephenson.

In the book, the lady, whose sixteen-year-old grandson has been murdered, devotes her days to sitting in the courtroom and being present amongst the pain and heartbreak of the various trials that take place. She does not differentiate between accused or victim, she’s just present for whoever is hurting and needs to lean on her.

“When I first came I’d look for people who had lost someone to murder or violent crime. Then it got to the point where some of the ones grieving the most were the ones whose children or parents were on trial, so I just started letting anybody lean on me who needed it. All these young children sent to prison forever, all this grief and violence…

“I don’t know, it’s a lot of pain. I decided that I was supposed to be here to catch some of the stones people cast at each other.”

When my own mistakes, bad choices, selfishness and disregard for others became public a few years ago, I lost everything I loved. I felt crushed by the people closest to me and others who barely knew anything about me, who either picked up stones and hurled them or just walked away refusing to have anything to do with me. Turning to the church only resulted in further rejection.

When the woman caught in adultery was brought to Jesus, he told them, “let he who is without sin cast the first stone”, at which point they dropped their stones and retreated. Sadly, we have not learned from this example of how Jesus wants
us to deal with each other.

Bryan Stevenson says: “Today our self-righteousness, our fear, and our anger have caused even Christians to hurl stones at the people who fall down, even when we know we should forgive or show compassion.”

Are we willing to simply let that happen? Proximity to the broken, the sinner, the accused, can be dangerous, a lot of stones are thrown, and catching them hurts and can be costly. 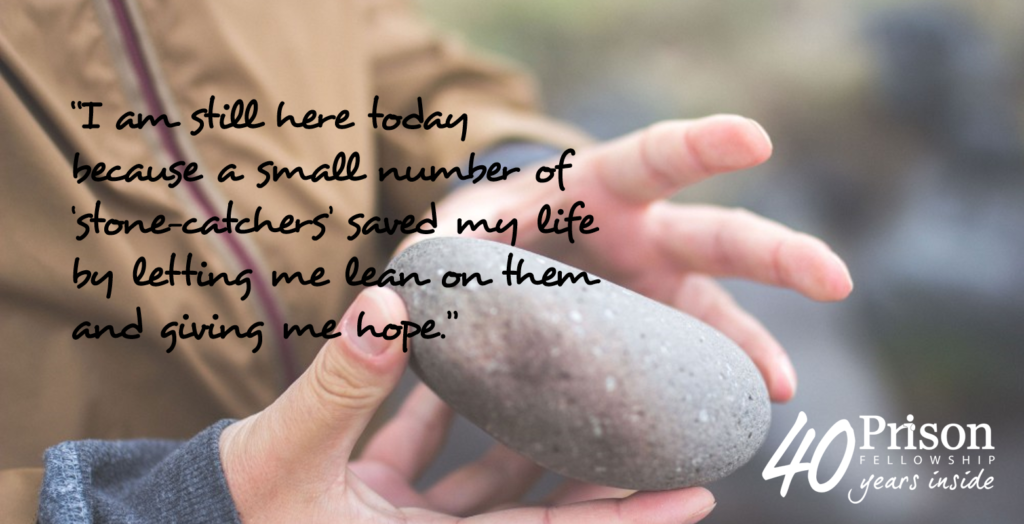 These people stood with me as people hurled their rocks—it was painful for them too. As they associated themselves with me, others turned their backs on them and to this day refuse to turn around; proximity is painful.

And so my dream is to encourage proximity, mercy and compassion, to ask people to think before picking up stones or simply walking away. We are all broken. At some point we will all need a stone-catcher.

Stone catching is not passive, it is costly, but if we can walk alongside each other when we mess up, then maybe our shared vulnerability will encourage a more compassionate and Christ-like church and society.

Quotes are taken from the book “Just Mercy: a story of justice and redemption” by the American author Bryan Stevenson. The story of Jesus and the woman caught in adultery can be found in John 8:1–11.

*Not his real name