When we read the opening chapters of Genesis, we see so many wonderful images of God interacting with creation. One of my favourites is from the second chapter, after we hear that God has created Adam from the dust of the ground, God bent down and: “breathed into his nostrils the breath of life; and the man became a living being.”  It is an immensely intimate picture, the Lord God, who has just formed the heavens and the earth, and everything in the earth, stoops as close to Adam as only a lover or a family member could, and breathes God’s breath into his nostrils.  In this moment we see not only the beginnings of humankind, but also the motivation and affection with which we were created as human beings.  After reading those first two chapters of the bible we should be in no doubt of the love and value that God sees us with.  We are no doubt: children of God and created in God’s image.

Archbishop Desmond Tutu, has been an inspirational campaigner against racism and discrimination throughout his life. In 1984, he wrote: “Apartheid’s most blasphemous aspect is that it can make a child of God doubt that he or she is a child of God.  For this reason alone, it deserves to be condemned as a heresy.”  These are strong words and it is easy to think that apartheid is over.  However, over the subsequent years he has made similar statements about other forms of discrimination and hatred.  It is too easy to discriminate because of difference.  Sometimes it is hard to see our common humanity, and our common heritage as children of God.

Issues of racial discrimination and bias continue.  Earlier this year, in the height of the early stages of this pandemic, we witnessed the killing of George Floyd in the USA whilst the police were trying to arrest him.  Some of his last words: “I can’t breathe!” became the rallying cry for protests for racial equality across the world.  There were also many voices raised in challenge to those who protested – I even read on social media: “he was a criminal, why are you mourning his loss?”   In George Floyd, many had seen our common humanity, but others had missed it.

When I was first asked to work in prison, I instinctively wanted to refuse.  Whenever I had been naughty as a child, my mother would say to me: “you’ll end up in prison!” and I had no desire to prove her right.  I also thought that prison was full of bad (maybe even evil) people.  I had never seen my common humanity with those who we keep inside the fences and walls of our prisons.  I will never forget my first conversation with a young prisoner, his grandmother had died and he was devastated by that loss.  She had been a constant support to him throughout his life when his parents, friends, schools and society had let him down.  In that moment I saw a hurting human being, not a monster who had done something evil.  In that moment, I saw a child of God, created in the image of God. 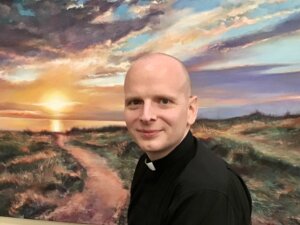 Download the November Prayer Diary, with a prompt each day for how we can pray for our prisons and our ministries.